Visiting the National Museum of the Pacific War 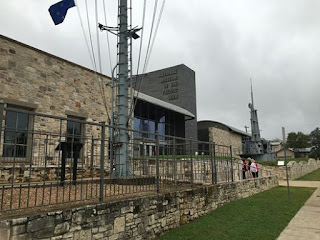 My husband and I have just returned from an anniversary trip to Fredericksburg, Texas, located in the beautiful Texas hill country. We've been to Fredericksburg several times and enjoy exploring the German heritage of the town, the shops, the restaurants, and all the rest of the sights the town has to offer.

One thing we've never done until this trip is visit the National Museum of the Pacific War. It is a fairly new attraction, having only been open the last few years. Fredericksburg is a logical place for this museum since it is the birthplace of fleet admiral Chester Nimitz, who played a significant role in WW2.

I've always been a little on the sentimental side when it comes to love of country, but this museum brought out feelings I didn't know I had. My dad was in the Pacific theater during WW2, in Okinawa. I am married to a Vietnam veteran, and I have other extended family members who have also served. Patriotism runs deep in our family.

Knowing all this did not prepare me for what I felt touring this museum. To start with, it's very well done and it's HUGE. Your ticket is good for 48 hours, and besides the main museum, there are two other locations. The main museum gives a thorough history of events leading up to WW2. It's educational, and the displays are interesting. Those are things any good museum should offer. What sets this one apart is the feeling that you're actually seeing things unfold right before your eyes.

The section describing the bombing of Pearl Harbor was unforgettable. A Japanese midget sub is on display. The sound effects are so realistic I almost wanted to duck and run. And that is just the beginning of this fantastic museum.

Authentic news reels and newspaper articles are used throughout. You can hear President Roosevelt speaking. You can find almost anything military related that was used during WW2, big or small, including everything from uniform patches to airplanes. 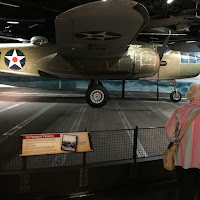 While all of this was quite interesting, I was also very moved and humbled. I've heard stories all my life about what an honor it is to serve one's country. Also what a sacrifice it is for the person serving, and for his or her family as well. I grew up knowing this. I'm the person who stops to thank military personnel in a restaurant or anywhere I see them. I feel a deep sense of pride when I hear The Star Spangled Banner. Still, all of this did not make me realize what our brave troops faced during WW2. Of course, unless you were there, no one can possibly ever know exactly what it was like. I feel touring this museum gave me a better idea, though.


Nothing was sugar coated. It was factual and historically accurate. Some of the pictures were not pleasant, but they were authentic. There were pictures of young men, some only teenagers, lying lifeless on a battle field, both ally and enemy. They served for love of country; for a cause. It wasn't the same as seeing soldiers lying on a battlefield in a movie. These men were real. They left loved ones, probably promising to return, but they didn't get to. Instead, they paid the ultimate price.

Others things I saw were uniforms in lighted displays, splattered with oil, and torn. There was also a hatch from the USS Arizona showing damage after the Japanese bombed Pearl Harbor, among many, many other things. 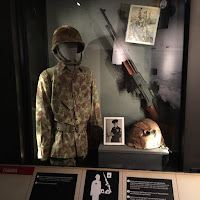 All military personnel have sacrificed, and all should be proud of their service. I want to thank them all right now, but I'd like to offer a special thanks to those who served in WW2. A majority of the veterans of that war are now gone. The rest are elderly and we are losing more every day. I want them to know their efforts were not forgotten. Until I saw this wonderful museum, I only thought I knew a little bit about the war they served in. History books can only tell so much. 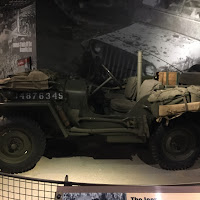 If you are blessed enough to see a WW2 veteran at a Fourth of July parade or Veteran's Day event, shake his hand. Let him know you have not forgotten him. We owe him and his fellow veterans our lifestyle, our freedom, and so much more. Those tears you see on his face are there because he remembers his eagerness, indeed his excitement, to serve his country. He was going, no matter where he was sent, and no one was going to stop him. That's the way it was then. He remembers exactly what he fought for, and he would do it all over again. For you. For the United States. He remembers. We should, too.

One final thought: it is hard to put into words how poignant this museum is. All I can say is if you are in the area, go. Take your camera, and maybe a few tissues. You may need them.

(And because this is primarily a writing blog) ~

Posted by Betty Castleberry at 5:44 PM