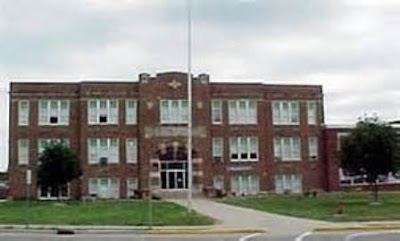 We've just returned from a trip back to my hometown, Robinson, Illinois. In case you're not familiar with it, Robinson is a small, friendly community which is the birthplace of the Heath candy bar. Since this is supposed to be a writer's blog, I should also mention it's the hometown of James Jones. It's known for a few other things as well, but what I want to focus on is the purpose of our visit.


Many of my family members are still in Robinson or the surrounding communities, so I always have a reason to go back. This time, along with a 50th wedding anniversary in the family, I went back for a 45th high school reunion. That's right, 45 years. Sheesh. How did I get so old? Well, however it happened, as long as a couple of years ago, I started telling my husband Don I wanted to attend this reunion. I missed the 40th and had no intention of missing this one.

Don is a quiet sort around crowds, so I knew I had to get him used to the idea early on. He also hates long drives in the car, so I started watching for reasonable flights a few months before the reunion. The problem was, I couldn't find any. The prices for two people to fly the 1100 miles from west Texas were through the roof. Even I couldn't see spending that much to sit on a plane for a couple of hours. So, slowly, and as gently as I could, I started to get him used to the idea of driving. I said things like, "It won't be too bad. We can enjoy the countryside." Wrong. All we saw were interstates and a bunch of really big trucks in a hurry. I even tried, "We can take whatever we want. We won't be limited to a few ounces of liquid and we won't have to go through security." We did, however, have to go through some turnpikes in Oklahoma. We got off a couple of times and had to get back on, paying double in some cases. Once when I was driving, we came to a

turnpike toll booth, and I accidentally started to speed through the Pike Pass lane. I immediately pulled over and my tolerant husband climbed out of the car, over the concrete curbing, and knocked on the back of the booth to pay while I hung my head in shame. He's a gem.

While driving through Missouri, one of us who was not Don, followed a road sign I thought was our route. It had the same route number, but in retrospect, I now know it was the business route. So, instead of sailing right on through, we ended up driving through a series of traffic lights and speed zones that slowed us down considerably. Concerned, I said to my tolerant husband, "This doesn't seem right." I knew for certain it wasn't right when I looked up ahead and saw the gates of Ft. Leonard Wood right in front of me. There was a humongous sign stating, "Security clearance required." Uh oh. I pulled off the to side of the road, got out, and told my tolerant husband I was not driving anymore. I refused to be the crazy great grandma on the evening news who tried to crash through the gates of Ft. Leonard Wood. Thankfully, there was a visitor's center to our immediate left, and my tolerant husband got us out of there by driving through the parking lot and getting us turned around in the right direction.

When we passed attractions, I said, only half kidding, "Do you want to stop at the Comanche Casino, Meramec Caverns, Six Flags, the candy factory, etc.?" We didn't stop, but my husband was still tolerant. He even put up with my "seat dancing" to the oldies on Sirius. 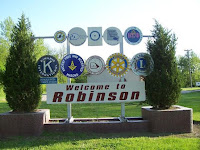 We finally made it to Robinson to attend the family and reunion festivities. Saturday night was the main event for my class reunion. I hate having regrets in life, but if I have any for that night, it would be that I didn't get to speak to everyone. The time was short, and I just missed some people, even though I made an attempt to mingle. For those I did get to visit with, thank you for taking the time to say hello. We are aging well, and I truly believe we have one of the friendliest classes ever. With the exception of family, I can't remember when I've been greeted with so many warm smiles and hugs. I've talked to others who don't enjoy their reunions because they say no one talks to them. Not us. I have never attended a reunion and felt out of place. For those of us who had teen-aged angst and issues, it seems we have gotten over them and have to come to appreciate each other. I, for one, am proud to be a part of such a great class. So, for the record, I want to thank the Robinson, Illinois graduating class of 1970 for a great reunion. I had a blast.

Oh, and special thanks to my husband who sat at the table while I flitted around. He's very tolerant.

Posted by Betty Castleberry at 11:01 AM