We've all heard it. Write what you know. A big part of that is another way of saying write from personal experience. Okay. There's only one problem. When I look back on some of my experiences, I'm not sure I want to share them, even though I could conceal them in the actions of a fictional character.

If I go way back, and I mean way, way back practically when we pedaled cars Fred Flintstone style, there is one incident that I could write about. I was about fourteen and flipping through a magazine meant for giggly, self-conscious, teen-age girls. The article said gelatin added body to your hair. Mom had Jello in the cabinet, so I grabbed a box of black cherry flavor, because it was my favorite. I wasn't going to eat it, but in my teen-aged head, this made great sense. Looking forward to the super model hair I was going to have, I dumped the whole package on my wet head and swished it around like shampoo. Did you know that gelatin sets up quite a bit faster in wet hair than it does in a bowl? The stuff in my hair was a sticky, horrific mess. Maybe the magazine didn't mean that kind of gelatin. I shampooed my hair about four times trying to get the stuff out, and still, it felt stiff.

I was already late for school, so I dried it the best I could. I left with my hair looking like the Scarecrow's from the Wizard of Oz. My friends all wanted to know what happened to my hair and why I was late, and I told them.

I have yet to live this down


I have yet to live this down. This story often resurfaces at class reunions, etc. Having an entire student body know about this is enough. I'm just not sure I want to put it in a book for the whole world to know.

Fast forward about fifteen years or so. It was my first time living outside the city limits, and I was dying to be a real country girl. I paid a visit to the local feed store and inquired about raising chickens. A breeze, I was told. They just needed shelter and food, and I would have fresh eggs every morning. As a matter of fact, I was asking at just the right time as they were taking orders for chicks. There were fifty chicks in an order, but they never could order enough, so I could split an order with two or three people. They assured me there would be people to share an order with me. Of course, I would need a rooster. There wasn't any way of telling the roosters from the pullets when they were chicks, they said, but each order had three or four; almost never more than five. If I was lucky, I would get one. So, eagerly, I put my name on the list and waited for the call to come and pick up my share of the chicks. When the call finally came, I was handed a huge box. 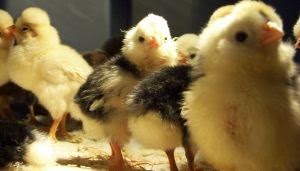 You guessed it - fifty chicks; an entire order with no one to share with me. Being young and not very forceful, I took them all. Trying to raise them was not as easy as I was told. A kind neighbor pitied me and took about two thirds of them off my hands. Hallelujah!

I could make this story more interesting by admitting there were nine roosters, but I don't see the point in that. Did I mention I almost went broke trying to feed all those stupid chickens? Who knew poultry could put away so much food? Chickens pretty much do just two things - eat and expel the digested food, sometimes at the same time. I know, I know. Eww. And if someone ever says to you "chicken feed" meaning something is cheap, slap them upside the head for me, would you?

One other thing I could write about if I was brave enough, is a much more recent event. After a doctor's appointment, I wandered out to the parking lot, my head buried in my diagnosis sheet. I barely glanced up to see where I was going and headed for the truck. Still reading and pretty sure I was doing it out loud, (okay, I was definitely reading out loud), I reached for the door handle. I almost had the door opened when someone said, "I'm Paul." I looked up to see a stranger sitting in our truck, his elbow resting on the open window, looking at me.

Not wanting to admit my embarrassment, I laughed and apologized


Stunned for a minute, I looked around and discovered it wasn't even our truck. Our truck was parked next to it. Now, in fairness to me, the two vehicles did look a lot alike, and I usually drive the car, not the truck. Not wanting to admit my embarrassment, I laughed and apologized. He laughed, too, and I told him he now had something entertaining to tell his family. I dropped my appointment card as I was getting in our truck. It was breezy, and the wind caught it. It fluttered underneath Paul's truck. Great. I was too mortified to get back out, bend down to reach under his truck and get it, so I just drove off. I could always call the office and get the specifics again.

So, I'm sharing these stories to say if you are brave enough to write what you know, go for it. If your life is anything like mine, nobody's going to believe they are real incidents anyway.


Posted by Betty Castleberry at 9:33 AM